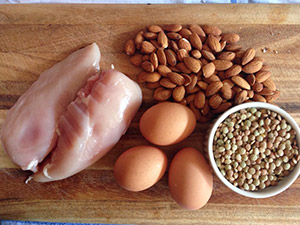 Protein shakes and paleo diets are all the rage right now but I’ve got to ring a cautionary note (if I may) regarding the excess protein in most Americans diets. My argument against excessive protein will be made both epidemiologically and scientifically. Don’t get me wrong there’s nothing wrong with protein but when it’s mostly animal-based protein vs. plant-based protein it’s more inflammatory and when I say more inflammatory I’m referring primarily but not exclusively to Insulin-like growth factor-1. IGF-1, like insulin itself, is designed to inflame you and induce growth. Unfortunately for most of us the growth is in belly fat and cancer and diabetes and this is not the right direction for your health.

You need protein. Protein is an essential building block of nutrition. Unfortunately when you eat more protein than your body needs it gets converted into sugar and then into fat. There is no significant way to store protein as energy. Your body stores energy as glycogen … a quick storage form and fat … the long term storage form of energy. This is simple biochemistry. You need fat in your diet. -Your brain is 60% composed of fat. How can cholesterol be evil and the cause of death dismemberment and destruction if we make cholesterol every day and people with a genetic deficiency where they can’t make cholesterol don’t live long. So you need protein and you need fat in your diet but too much of either is not a good thing.

Many people are starting to understand that the high carb diet recommended by the American Heart Association is dead wrong and in their effort to decrease the carbs they turn to protein (i.e. the paleo diet) which is low carb and high protein. You can lose weight on this diet, no problem, because you have eliminated sugar and thereby lowered Insulin which is the key to weight loss. So you can lose weight on a high protein diet but it may not be healthy for you in the long run. Too much protein can lead to weight gain, diabetes, cancer and heart disease. 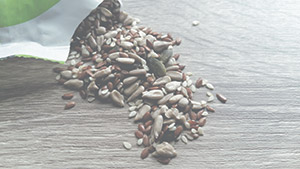 Science wise, we have discovered mTOR … which is mammalian target of Rapamycin. This protein kinase is the ultimate controller of growth and destruction at the cellular level. High mTOR is important when you are a child and promotes growth but when mTOR is high in adults it promotes cancer etc. Excessive protein in the diet can stimulate mTOR. This excess protein is typically animal based which is high in methionine, an amino acid which directly stimulates mTOR. There is speculation that caloric restriction which has been shown to prolong longevity probably does so because of the restriction in methionine.

Let’s look at an epidemiologic study on protein in the diet. In 2016, researchers reviewed protein intakes of more than 131,000 women and men from the Nurses’ Health Study and Health Professionals Follow-up Study. After tracking their diets for up to 32 years, the authors found that a higher intake of red meat, especially processed versions (sausage, bacon, hot dogs, salami), was linked to a modestly higher risk of death, while a higher protein intake from plant foods carried a lower risk. This is a large study done for a long time in a population we are familiar with so it has to be taken seriously.

Broadly there are multiple reasons that more than a little red meat is bad for you.

#1 There is an increased cancer risk … primarily of colon and rectal cancer but also in premenopausal breast cancer. I am not a vegetarian but that group has a 40% reduction in cancer compared with us omnivores. Processing or cooking meat produces compounds known to be carcinogenic including heterocyclic amines (HCA) and polycyclic aromatic hydrocarbons (PAH).

#3 Eating meat increases risk of obesity. Cultures around the world with the greatest meat intake also have higher rates of obesity and this gets back to the fact that excess protein is turned into sugar and then into fat in the body.

#4 Meat represents the highest risk for foodborne illness. Sure romaine lettuce has taken a beating recently but it pales in risk compared to salmonella etc.

#5 Meat eaters have more atherosclerosis and this has an effect on their sexual performance and vegetarians have been shown to have better sperm quantity and quality. Maybe the hormones in the meat affect your sex life as well.

#6 It is estimated that 60 percent of all antibiotics sold in America make it into our livestock and this poses risks to all of us in terms of antibiotic resistant organisms etc.

We probably need half the protein we have been told we need. The old rule is 1 gram of protein for every kilogram of ideal body weight. So a 170 pound man weighs 77 kilogram and that means 70 grams of protein in the diet. The new understanding of protein metabolism says we need only one half that amount. If you are going to eat meat your daily portion should be smaller than a deck of cards.

Whey protein is made from dairy source and still as IGF-1 in it and is therefore not the best protein source. Pea proteins are better but still may be inflammatory for lectin reasons. Horses, the Great Apes and Elephants never touch animal protein and look how well muscled they are. I recommend if you really want to have a protein shake that you try hemp seed, flaxseed and spirulina as good sources of non inflammatory protein.

Until next month … get well … stay well.